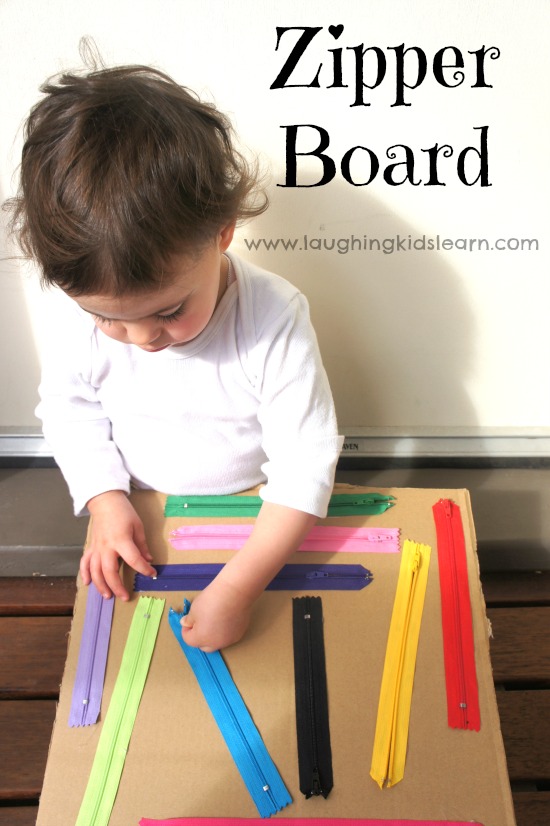 I love making my own toys. My DIY Tugging Box and Sensory Board for Babies would have to be two of my most popular posts on Laughing Kids Learn. Don’t forget to check them out at the end of this post.

Possum (aged 2.5 years) has very much entered the stage of independence and wanting to do everything herself. There are times that she is able to complete things with great success, however, we can often find that some tasks are a little beyond her current abilities and we then enter the stage of major frustration and tantrum territory. I know you know what I mean. 🙂

Whilst trying to dress herself, Possum became quite curious about a zip she found on a pair of pants. I demonstrated to her how a zip worked and she had a few attempts herself. It was from this point that I came up with the idea of a DIY zipper sensory board for kids! Simple, fun and educational. 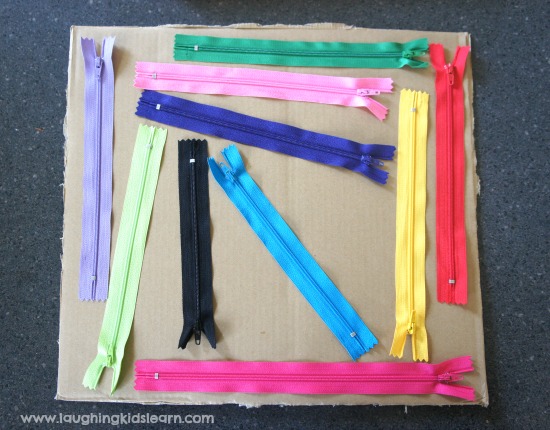 What you will need –

How to make your own DIY zipper board for kids

I began by cutting out a piece of cardboard from an old nappy box. I had 10 coloured zips for this sensory board and so I made the size of the board a suitable size so that all zips would fit. It’s a good idea to firstly decide how you ‘d like your zips to be positioned on the board. I considered how this board would be used during play and so making them zip in various directions was important to me. 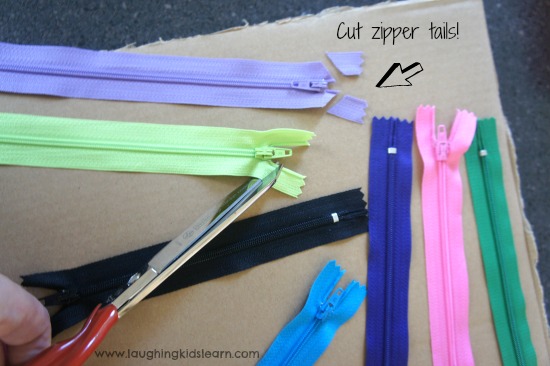 It’s a good idea to check your zips are not able to completely separate once used. The ones I used had little metal staples at the end to ensure they didn’t come apart. If yours doesn’t have these metal staples, I’d suggest adding a staple yourself.
I found my zips didn’t sit completely flat when placed on the board. Using quality scissors, I cut off the tail ends of the zips, as clearly shown above. 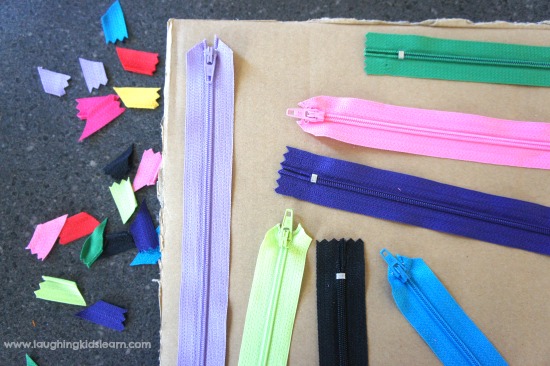 Doing this step allowed each zip to lay completely flat and ready for the next step. 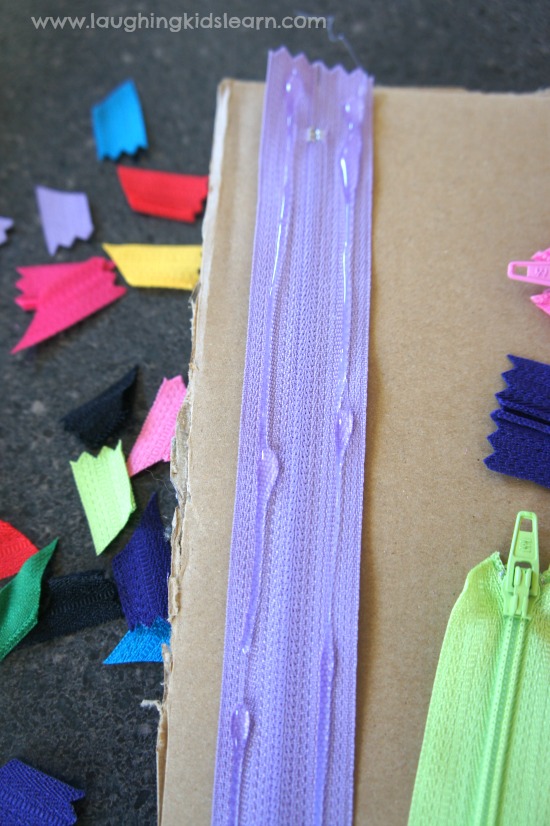 Securing the zips to the board

This is where things got a little tricky and I recommend this step only to be performed by an adult. Using a hot glue gun run a length of glue on either side of the zip, completely avoiding the middle area that will later be separated when the zip is opened. 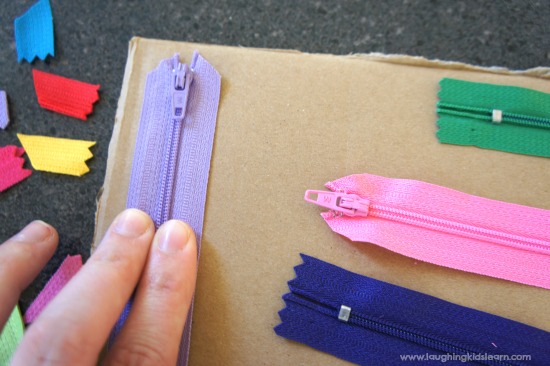 Once you have added your glue, add it to your cardboard and lightly press the zip into place. Remember, you want to avoid glue running into the middle of the zip so pressing/spreading the glue to the outer edges is a great idea. 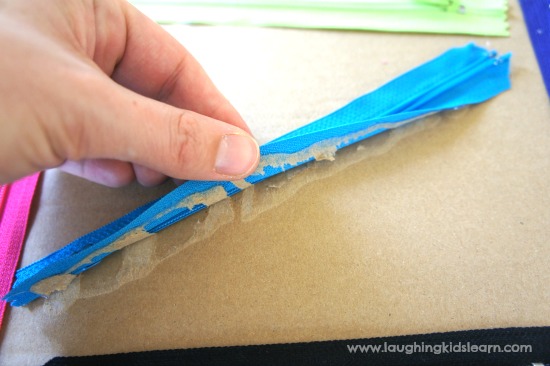 Of the 10 zips I did, there was only one that wouldn’t allow me to zip it from top to bottom. Clearly some of the hot glue made it’s way into the middle of the zip and sealed it closed. How I was able to easily solve this problem was pulling up one side of the zip and attempting the zip again. After a few attempts the problem was solved and I could secure the zip once again with some more glue. 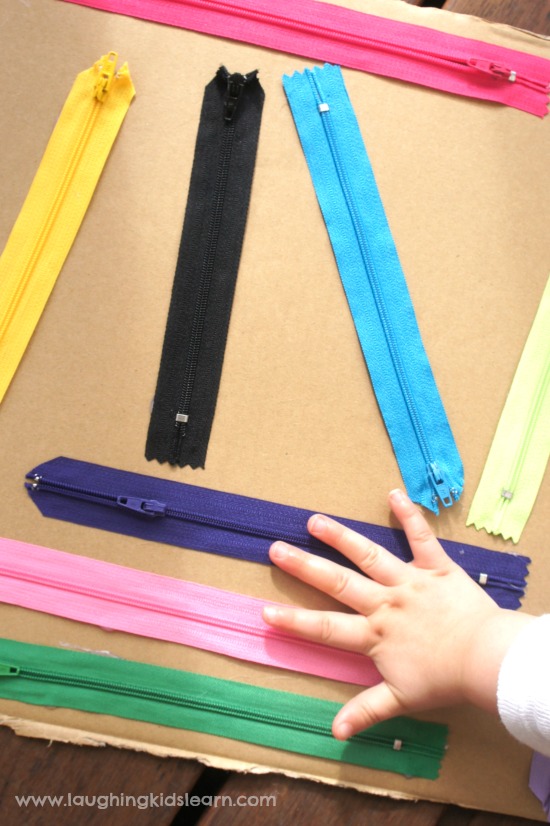 Learning achieved with this zipper board

Possum had a fabulous time playing with her own zipper board and did so most of the afternoon. In fact, she seems to play with lots of the learning actives, such as the DIY tugging box, I make for her. Possibly because I am tapping into her interests and stages of development. Key learning points achieved with this zipper board are –

This type of board would also be fabulous for those children to use when at the toilet training stage as it would keep them occupied enough to sit still. Could also be added to the car for those long car trips. 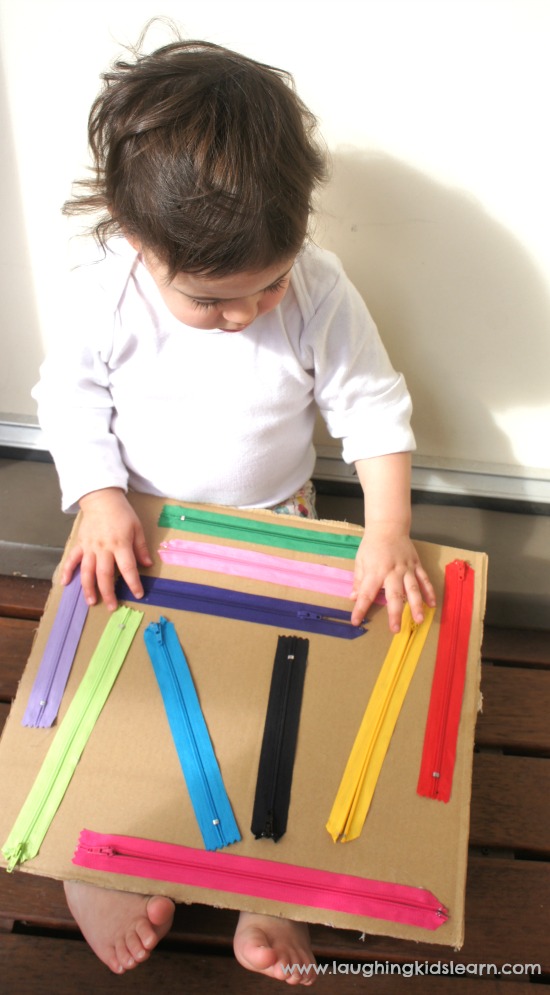 To be honest, this was such a simple activity board to make. It probably took me about 15 minutes to put together and the learning and fun that has already been achieved from Possum using it has been absolutely priceless. I know she will request to play with it tomorrow and no doubt the days after that.

I also really love that it’s an idea that would really suit babies through to preschoolers.

Would your child enjoy playing with a zipper board?

Look at what else we have done! 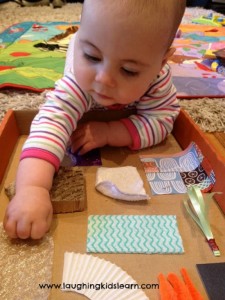 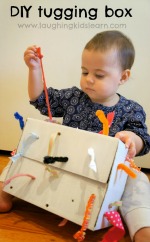 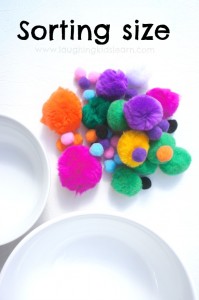